Everything can be crafted at the forge. The enemies/merchants will disappear as soon as you unequip the rings.


There are male and female versions of the enemies/merchants at your disposal. The name of the male merchant is Za'rjo, a Khajiit. The female Dunmer Arvyn buys and sells your stuff.

If you need someone to fight with, just summon either a male Nord bandit or a female Imperial bandit using the Ring of Sparring.

You can recruit the merchants as your followers but they are not counted as normal followers because they are running on their own custom follower framework. Arvyn and Za'rjo will not comment your actions, the surroundings, etc., and will only answer your commands. I designed this deliberately as there are enough chatterboxes and I want to enjoy the beautiful landscape undisturbed. However, If I need company, I will summon Arvyn and/or Za'rjo with the ring.

MCM = Mod Configuration Menu; MCM belongs to the SkyUI interface mod.
Since the initialization of new MCMs is generally tricky, I recommend you to to read the section Where can I find the MCM? under the FAQ.

If you have SkyUI installed, you can customize the status values (health, endurance, magic resistence, etc.) of the respective NPCs and other settings like merchant gold via MCM. These things are also possible without MCM using console commands instead (further information on this topic can be found in the in-game manual "SESM Global Variables Manual"). MCM or rather SkyUI are not stringently required to play SESM.

Hotkeying the rings for faster access is also possible. Just mark one of the rings as favorite in your inventory, switch to the hover over it with your mouse and hit one of the numeric keys. Pressing the assigned key in the game, the hotkeyed item will be equipped/unequipped automatically. Alternatively, you can use for example Extended Hotkey System.

Copy all folders and the "Spawn Enemy and Summon Merchant.esp" into your data folder and activate the esp. Activating the esp is possible e.g. in the main menu of the game (Start game -> Mods -> Load order -> check the box). Alternatively, you can use Vortex (beginner-friendly) and Wrye Bash (has some nice gimmicks like creating savegame profiles). Both tools are available at Nexusmods.com.

SkyUI and SKSE (Skyrim Script Extender) are additionally required, if you want to make use of the MCM of SESM.

Please make sure that the correct version of the SKSE for your game is installed:

Updating to a newer version:

Firstly, take out all items you put in the follower inventory of the merchant. Save your savegame and make a back-up copy to be on the safe side.

Option 2:
Reset the esp of SESM in your savegame using FallrimTools; see FAQ, "Where can i find the MCM?", Scenario 2, Option 4.

Where can i find the MCM?

Scenario 1: a savegame where SkyUI is not present
The Esp files of SkyUI and SESM should be activated. Load your savegame and wait until the message "MCM registered (1) menu(s)" appears two times in a row (or once as "MCM registered (2) new menu(s)"). You can now skip to the section When the MCM of SESM has been loaded correctly

Scenario 2: SkyUI is already present in the savegame

Option 1:
In the game, press Esc to open the main menu and click on System. The mod configuration menu is located on the left side. Click on it. If SESM is not listed as submenu in the MCM main menu, close the MCM main menu and the main menu. After about 30 seconds, the message "MCM registered (1) menu(s)" should appear. If you see this message, the mod configuration menu has added SESM as its submenu.

Option 2:
Do a quick-save/quick-load combo: first press the F5 key, and after the quick saving has been finished, press the F9 key.

Option 4:
This is where FallrimTools is called to action (requires Java 8 or higher). Open FallrimTools (ReSaver.exe) and load the savegame which you want to edit (the savegames are usually located under Documents\My Games\Skyrim Special Edition\Saves). In the list on the left side, navigate to "Plugins (ESP & ESM)" and expand it. Click with the right mouse button on the entry "SkyUI.esp" > Delete plugin changeforms. Make another right-click on this entry > Delete plugin script instances. Save the savegame under a new name: File > Save As. Hereby you have a back-up of the original unedited savegame. Put the back-up into another directory so that you cannot mix the savegames up in the game. Now you can load the edited savegame. Wait until all messages regarding the MCM have been shown.

Option 5:
Use this console command to reset the whole MCM:

When the MCM of SESM has been loaded correctly
In the game, press Esc to open the main menu and click on System. The mod configuration menu is located on the left side. Click on it. The MCM of SESM should now be listed as submenu in the MCM main menu.

Should I play the mod with the Pre-AE version or the AE version of Skyrim?

Basically, it doesn't matter. If you choose to use the MCM, please make sure that the right version of the SKSE for your game is installed (see installation). I have tested SESM with both versions of the Special Edition and I didn't experience any problems so far.

Personally I play Skyrim SE in version 1.5.97 including the four free Creation Club contents of the AE update. With the help of the "Unofficial Skyrim Special Edition Downgrade Patcher" (BestOfBoth-Version), I made an downgrade of the exe which comes with the AE update, so that I can keep the free CC contents. But why I did this? I just wanted to continue using certain SKSE mods which are not compatible with AE update or have problems with it.

Creating of patches: allowed; please mention my name (Selene310187 and/or darklady310187) in your credits. Furthermore, your patch must have the original esp of SESM as master. When editing scripts, it must be ensured that all basic functions of the mod still work (calling the enemies/merchants, the follower mechanisms of the merchant and the costumizing of the various settings like status values or merchant gold).

Translations: allowed; please only include the files🞸 which are necessary for the translation. The remaining files must be downloaded separately from the download page of the original mod. Please mention my name in your credits, too.

see „SESM Localization Tutorial“, Part 4: Wrapping up
Scripts: I don't mind if you use some code snippets in your mod. Mentioning my name in your credits is desirable but not mandatory.


Releasing alternate versions of SESM which make changes to the original esp of SESM is not allowed.

I thank Joseph Russell for his tutorial🞸 Creating a Custom Follower Framework which served as inspiration for the custom follower framework of SESM.
Furthermore, I was inspired by the Amazing Follower Tweaks SE mod in terms of using multiple followers. My thanks therefore go to Dheuster for creating the original Oldrim version of the mod, and Allie and AFKRoger who converted AFT to Skyrim Special Edition.

The dialogue bug which he mentions at the end of the tutorial can be solved by creating a sequence file with SSEEdit for your follower mod (this also applies to other mods which contain dialogues):

In SSEEdit, make a right-click on the plugin > Other > Create SEQ File.

Repeat this process every time you add another quest to your mod which contains dialogues. Later, when you release the mod, put the Seq folder which only contains the seq file of your mod into the archive of your mod besides the esp and any other folders like meshes or textures. 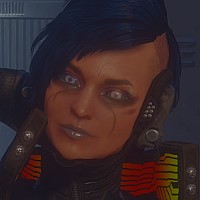 Since autumn 2007, I create mods for the game The Elder Scrolls IV Oblivion. After I did some tutorials, I started my very first project: a house on an island near Anvil. This project woke my passion for making mods. Retextures of weapons and armors, conversions of armors/clothing to Exnem/HGEC and Robert Male and new races followed.

I also create mods for Fallout 4 since 2020 which are for example craftable objects for your settlement and cyberpunk/cyborg/sci-fi related stuff for your character.

In the spring of 2022, I started to make stuff for the Special Edition of Skyrim.

Through the work on my Oblivion project Abyss Demon, I was able to build 3d models (e.g. weapons and armor) from scratch with the help of Blender.

This website uses cookies to improve your experience while you navigate through the website. Out of these, the cookies that are categorized as necessary are stored on your browser as they are essential for the working of basic functionalities of the website. We also use third-party cookies that help us analyze and understand how you use this website. These cookies will be stored in your browser only with your consent. You also have the option to opt-out of these cookies. But opting out of some of these cookies may affect your browsing experience.
Necessary Always Enabled
Necessary cookies are absolutely essential for the website to function properly. This category only includes cookies that ensures basic functionalities and security features of the website. These cookies do not store any personal information.
Non-necessary
Any cookies that may not be particularly necessary for the website to function and is used specifically to collect user personal data via analytics, ads, other embedded contents are termed as non-necessary cookies. It is mandatory to procure user consent prior to running these cookies on your website.
SAVE & ACCEPT
Scroll Up